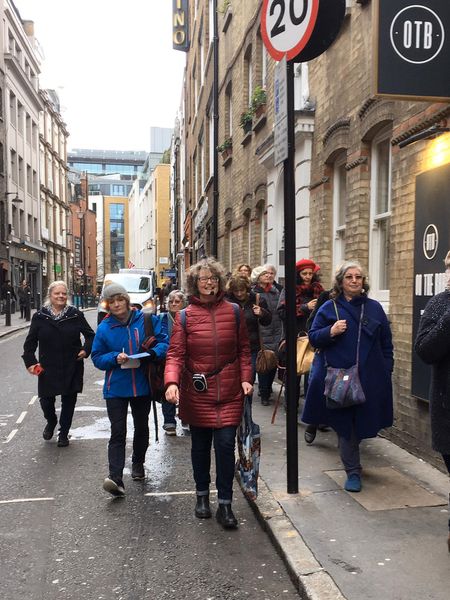 Walk participant Jane Sumner was kind enough to take the trouble to provide this account of the walk: … on a rather grey overcast day, the spirits of sixteen Shorter Walk Group members were raised as we were treated to a very interesting walk. We were enlightened about the Chartists which was a male working class movement wanting to gain political rights for all men. We started off at one of the pubs, The Red Lion where they held their meetings in an upstairs room but no time for us to have a drink as we were led to Marshall Street to see where William Blake was born in 1757. His house no longer exists but there is a plaque commemorating his birth. We also saw where Karl Marx lived in considerable poverty in Dean Street when he was working on Das Kapital. There is a blue plaque on the wall above the Quo Vadis restaurant which is so high up you wouldn’t necessarily notice it. As we walked through the busy and noisy streets of Soho with Oonagh having to battle to be heard above a Hare Krishna parade, we all enjoyed the opportunity to learn more about some of the famous people who have lived in Soho in the 18th and 19th centuries. Thank you Oonagh for sharing your knowledge with us and bringing the past to life.

“Thanks to John for an interesting and circuitous Dickens-themed walk from Embankment to Farringdon via Gray’s Inn, Lincoln’s Inn Fields and interesting back streets. The One Tun pub was fictionalised in Oliver Twist as The Three Cripples. Authors Vera Brittain and Winifred Holtby lived in the same street as the Dickens Museum.” – Rosyln Byfield.

Trafalgar Square and environs : a walk led by Philip Messent