Finally, able to resume our Middle Way Walks, on Wednesday and Thursday we once again ambled alongside the Lea River for the lovely section from Broxbourne to Hertford. On both days of the we had some sun, some clouds and some rain, but I think the joy of being together again rather diminished the annoyance of getting wet. Some of us hadn’t seen one another since lock down and enjoyed the chat as much as the views. We walked along Rushymeade woods and past Dobb’s Weir where the river and the navigation path split and we saw the historic 18th century Fish and Eels pub (pictured above right). We passed where the River Stort joins and contemplated a future walk along said river. We then passed Rye Meads nature reserve which we is well worth a visit for any bird lovers amongst us, but we hadn’t the time. We soon had a quick peek at Amwell Quarry nature reserve, but once again had no time to visit. After a picnic lunch, rushed a bit by rain on both days, we continued along the path enjoying the birds and the beautiful autumnal colours. When we reached Ware we had to detour around the closed canal for a brief look at Ware town centre and optimistically noted that most shops and cafes seemed to have remained open. The river soon widens and joins the River Beane and thereafter the beautiful King’s Meads. Upon reaching the end of this section I think all agreed that the best part was the feeling of normalcy once again and a fervent hope we can continue to walk together.

Although we were forced to cancel the original Lea Valley #2 walk due to yet more dire weather predictions, we were lucky enough to still have two lovely walks, both with very little rain and even blue skies! We started this section along an industrial stretch of the path passing the large reservoirs to our right. When we reached Ponders End we enjoyed some lovely sculptures and diligently looked out for some promised otters, but none were to be spotted. We did enjoy a Heron posing for us and quite a number of geese and swans pairing off for spring. We also saw quite a number of bird species and a few of us learned how to tell the difference between a Moor Hen (who have a red beak, thanks Janet) and a Coot. After a quick coffee stop we walked under the M25 and left Greater London. We enjoyed a great number of boats docked of all types and sizes and with decorations ranging from gardens, to plaster heads and a stuffed dog or fox. We spotted a couple of rowers and a long boat with a friendly couple waving us. Lunch was a bit chaotic on both occasions so best not to dwell on it any more than that. After passing Cheshunt Lock we spotted some Muntjac deer off to the right and 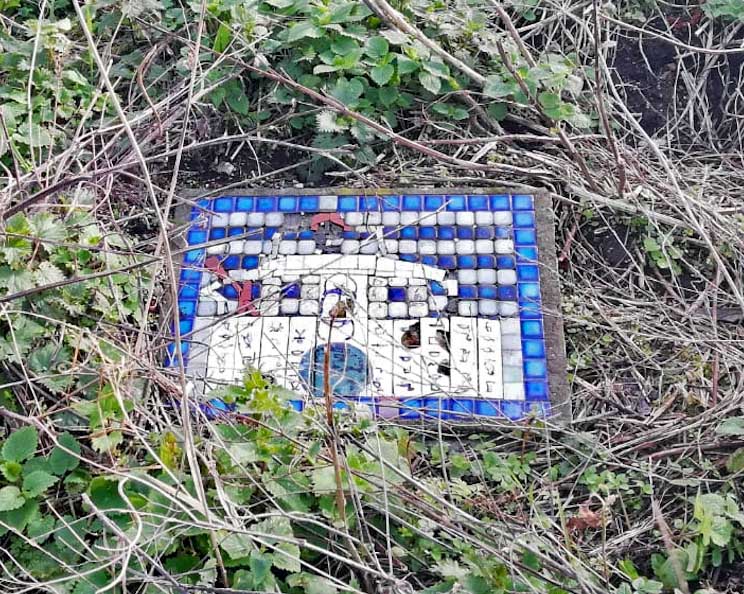 stopped to enjoy their company for a bit. The second observant group discovered some colourful mosaic tiles which had been set into the ground along the path. Most of them were covered by growth, but we managed to photograph one which had been cleaned off a bit. We ended our walk at Broxbourne Station after having had two unexpectedly lovely days. 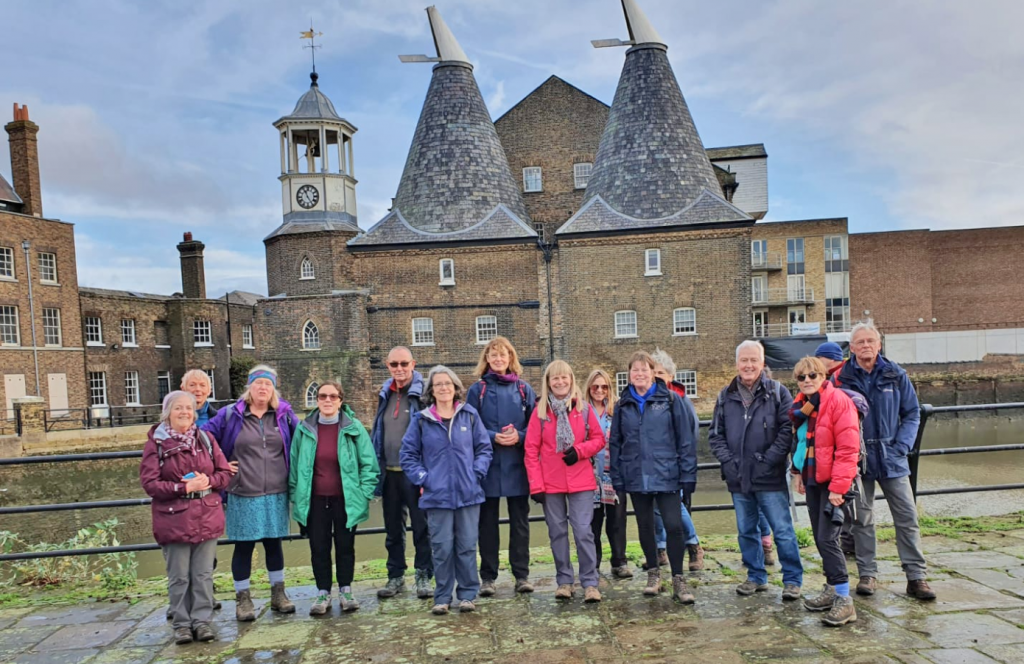 Much to the 18 walkers’ pleasure, the first leg of the Lea Valley Walk began with blue skies and mild temperatures as we headed out from Limehouse Station. We quickly arrived at Limehouse Basin, where the River Lea meets the River Thames, and followed the Limehouse Cut (the first navigable canal to be dug in London). Walking along the canal made us forget the hustle and bustle of the city just above us We soon reached the beautiful Three Mills, the world’s largest tidal mill, which has been around since Saxon times and has produced flour, gin and munitions. For anyone interested, it is open for guided tours on Sundays. It is certainly worth a visit, with or without a tour. We then had our first impressive view of Queen Elizabeth Olympic Park to the right. and stopped for a quick coffee break. Soon, as we passed the last large great reservoir, we crossed the bridge to walk along Walthamstow Marshes, Europe’s largest urban wetlands reserve.

We saw birds of all varieties, houseboats of all size and descriptions and beautiful graffiti on the underpasses. We also, perplexingly, saw trucks parked in some of those same very small, narrow underpasses. Finally we reached our lunch spot at Markfield Beam Engine and Museum café.

The steam engine was built by the Yorkshire born Wood brothers in 1889 and can be viewed on various Sundays from spring. Our blue sky was slowly turning grey and a few sprinkles appeared as we were lunching outside under cover. A chill developed in the air and we donned our waterproofs as we headed off to finish our walk, only to be removed very quickly as the rain disappeared and the chill went away. Relief was felt by all as we had been walking along at a good pace just to avoid the predicted afternoon rain. We then passed a popular rowing area but caught sight of only one rower. She, however, was of a “certain age” and moving very swiftly, so that those of us of that same “certain age” felt a flash of pride. After passing Tottenham Locks, the observant amongst us caught sight of Alexandra Palace’s mast off to the left. We briefly walked alongside Pymmes Brook, past Tottenham Marshes and ended our walk in Upper Edmonton at Meridian Water Station, a first, I believe, for all 18 walkers. It was certainly a much appreciated mostly dry day and we look forward to our second leg when we will leave greater London and end our next leg at Broxbourne.