Members must not attend CEDu3a walks if they or a close contact have recently been diagnosed with or shown any COVID-19 symptoms, are awaiting test results or are self-isolating under Government guidance applicable at the time of the walk

No bookings accepted before the stated dates and times 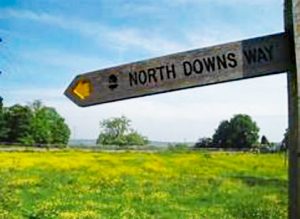 From Bearsted Station, we retrace our steps to the village of Thurnham where we re-join the North Downs Way, continuing to climb until we reach the top of the escarpment near Thurnham Castle. In the morning there are numerous steep descents and ascents with about 50 steep steps each up and down. This makes the first half of the walk quite tiring and we can stop to replenish with water and snacks. Lunch will be approximately halfway through the route at about 2 p.m. After lunch the walk continues along the ridge, descending to go through the village of Hollingbourne. The next section is relatively level as the NDW shares the route with the Pilgrims Way Track. There is a final slight descent as we leave the NDW and drop south to Lenham Station, from where we return to London Victoria.

Tring in west Hertfordshire is located at a low point in the Chiltern Hills known as the ‘Tring Gap’. This has been used as a crossing point since ancient times, being at the junction of the Icknield Way and under the Romans Akeman Street, the major Roman road linking London to Cirencester. In more recent times it has provided a route for the Grand Union Canal, the West Coast mainline railway and the A41. This walk uses three long distance paths to explore the countryside around the Tring Gap. To begin with we follow the Ridgeway national trail as it climbs from the lowlands to follow the crest of the Chilterns through Tring Park ( spectacular views) and on to Hastoe. After leaving the Ridgeway, we pick up the Chiltern Way just to the south and head north-east along the line of an ancient earthwork called Grim’s Dyke. In the afternoon we descend back down into the ‘Gap’ at the delightfully named settlement of Cow Roast, where we cross the Grand Union canal for the second time. The final stretch of the walk takes us long the base of the Chilterns to the village of Aldbury, where we meet the Hertfordshire Way as we return to Tring station.

We start in Broxbourne, following the New River north to Rye House, where we turn to face south and follow the Lee Navigation past Dobbs Weir to the large gravel pits known as Nazeing Meads. Nowadays, these form part of the Lee flood relief system and are something of a haven for wildlife, especially waterfowl. Our walk takes us between and around the Meads and on into Lower Nazeing. Here we encounter our only climb of the day, ascending to an altitude of 75 metres to reach the top of Clayton Hill, where we will be rewarded with a panoramic view of the Lea Valley. Our route continues southwards before curving round to the west to return to the River Lea. After crossing the flood relief channel as it exits Nazeing Meads, we reach the Navigation once more and take the towpath north to return to Broxbourne.


Please note ‘preferred’ dates are not accepted.
If you are available for both dates enter EITHER
Enter a specific date only when you really cannot make the other date
If you do so, there is no guarantee that you will be offered a place on that date

Although long, there is much less cumulative ascent and descent on this leg of our journey, compared to previous sections.
Starting from Lenham Station we pass through Lenham village then climb gently for approximately 50 metres to re-join the North Downs Way. We continue largely on the level, with the North Downs Way following the route of the Pilgrim’s Way. Shortly after skirting the village of Charing we continue to the south-east often walking through a ‘tunnel of trees’. We shall stop for lunch at approximately 1.30pm, after which we descend very gradually to our destination of Wye. After passing through the small village of Boughton Lees the NDW divides into two branches. We shall follow the south-eastern branch which heads to Dover via Folkestone, rather than the north-eastern branch which leads to Canterbury.
From Wye we take the train back to London Victoria.