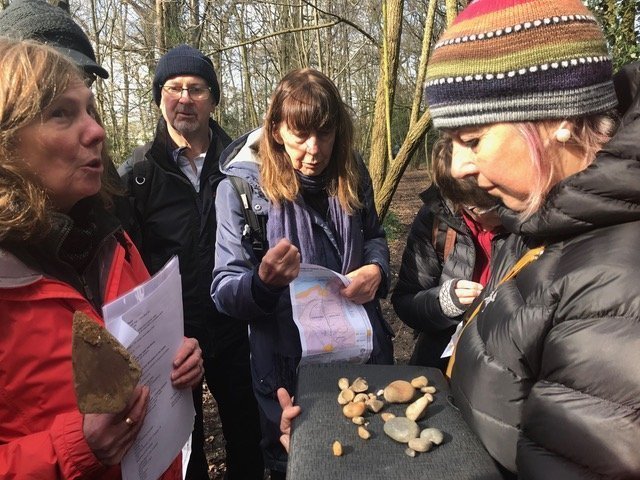 On 13 March 2019 members of the Group went down to the woods and were in for some big surprises on a field trip to Highgate & Queens Woods. This was brilliantly led by our local expert Diana Clements. With her colleagues she has created an excellent display in the Highgate Wood information hut, the starting point for our visit.

Here is what we discovered:

◻︎ Rocks at the surface of North London reveal a history dating back more than 50 Ma (million years) to the Eocene. At this time London was at the present latitude of Barcelona & greenhouse gases (mainly CO2) in the atmosphere were double what they are today. Temperature here ( & even in Antarctica) averaged 37C and the flora was semitropical with palm trees, fringed coastlines & shark infested seas (backed up by local fossil finds including fruits & seeds; shark & crocodile teeth & marine creatures)

◻︎ As we know from our earlier U3A sessions subsequent changing latitude (tectonic plates/volcanic activity) & sea level fluctuations were major factors shaping the nature of sedimentary sequences. In the Eocene London including Highgate and Queen’s Woods was under this tropical Sea. London was underlain by a thick layer of blue clay (becomes more familiar orange near surface due to oxidation of iron content). This clay originated from mud discharged by southerly flowing large rivers

◻︎ Towards the end of the Eocene seas became shallower & the river discharges sandier. These sandy deposits known as Claygate Beds overlie the London Clay in Highgate Wood This material made its way into locally manufactured Romano-British era pots & 19th century bricks. We saw fascinating evidence of the former in photographs of an excavated Roman pottery site & walked to the site.

◻︎ The youngest sandy deposits Bagshot Sands are near shore marine sands found on higher ground (Highgate Hill, Hampstead) but not in the Woods.

◻︎ We fast forward to a few million years ago to understand the origins of the next most superficial deposits in the London area – Gravels. At this time the Thames took a more northerly course through the vale of St Albans & ran out to the North Aea near Clacton. Tributaries flowing northwards deposited Gravel (called Dollis Hill Gravel) on high ground near the Woods (Finchley & Ally Pally)

◻︎ Deposits include pebbles of Lower Greensand Chert (microcrystalline quartz or flint). Over 500 fragments of worked flint (tools) have been unearthed in the Woods

◻︎ It is thought that the traces of these pebbles & gravel in the Woods (unearthed by eager diggers on our field trip!) are the residue of larger deposits that lay on an ancient river bed

◻︎ There is a suggestion of more widespread gravel deposits in the woods. evidenced by 19th century maps giving the alternative name of Gravel Pit Woods. We visited the site of an excavated pit, now a water filled pond, behind the Highgate Wood playground

◻︎ Half a million years ago an ice age led to the formation of the Anglian Ice sheet which pushed the course of the Thames south to its modern position. This Ice Sheet deposited so called Glacial Till (boulder Clay) a tongue of which advanced as far south as Muswell Hill but not as far as the Woods

◻︎ The pattern of streams in the two woods also differ

◻︎ Springs arise where gravel or sandy sediment layers meet impermeable clay. Our field trip included a pilgrimage to a handsome Victorian granite water fountain in Highgate Wood marking the outlet of one such stream. Those in Highgate Wood flow to the west (via the River Brent into the Thames at Brentford) whilst the more deeply incised streams in Queen’s Wood all flow eastwards (via the Moselle, then the River Lea to join the Thames at Bow Creek). The much more deeply incised valleys in Qween’s Wood were probably cut by glacial water flow from the melting Anglian Ice sheet 0.4Ma.

Text and image by Jim Cohen