Our monthly meetings are held on the second Thursday of the month at the Union Church and Community Centre, Weston Park, N8 9PX. They are open to all members (please bring your membership card) and you are welcome to bring a guest: it is possible to join at the meeting.

Members arriving after 10.30 a.m. will be asked to access the venue via the entrance to the right of the main door (up the ramp).

Tea and coffee are available from 10 a.m. – please bring your own cup or mug. 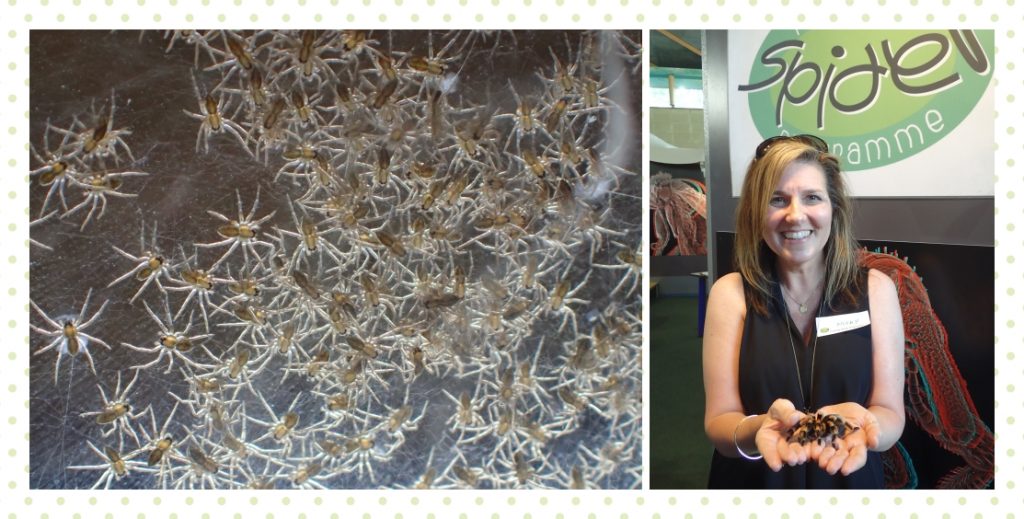 🕷 Spiders are a much maligned group of animals, but vital to our continued existence (and really nice once you get to know them!). This talk will illustrate the way ZSL London Zoo aims to redress the balance, by educating people about the positive side of spiders, presenting innovative displays to the public, direct conservation initiatives, and even curing arachnophobia on the Friendly Spider Programme 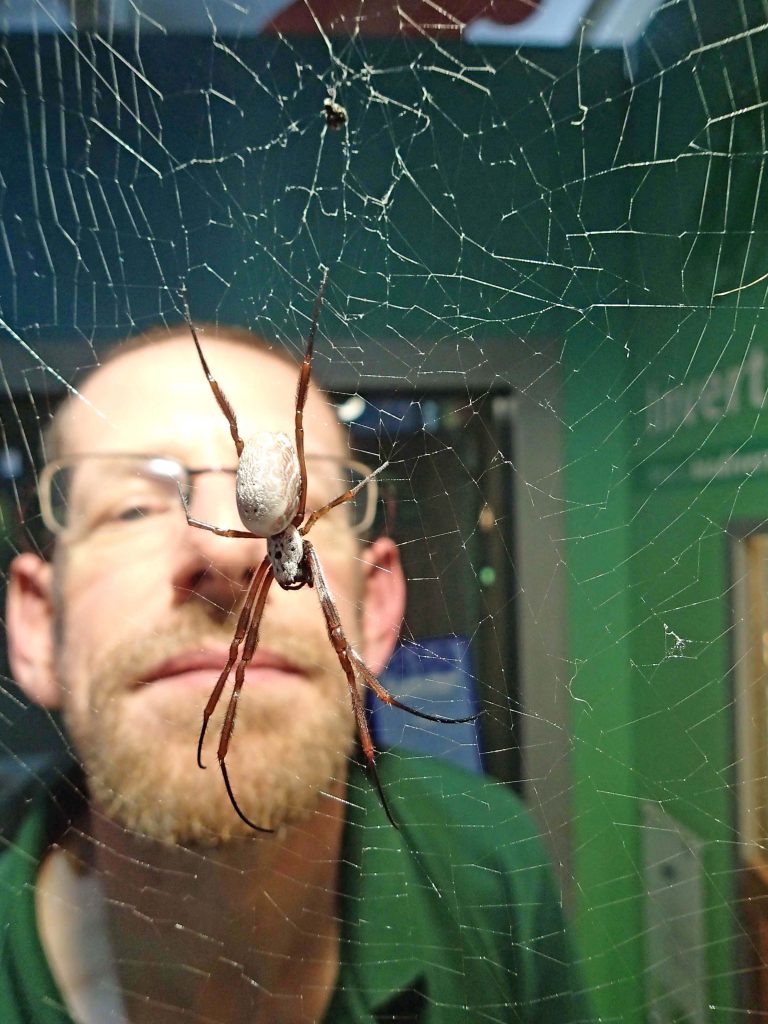 Dave Clarke is Head of Invertebrates at the Zoological Society of London. He has participated in captive management, exhibition and conservation programmes for a variety of species for over 35 years at ZSL London Zoo. Although having experience with all taxa, he has specialised in invertebrates and was instrumental in creation of the BUGS biodiversity display and Butterfly Paradise exhibits. An active member of national and international conservation bodies, Dave continually seeks to champion and promote the importance of invertebrates in zoos.

Victorian women were early adopters of the bicycle during the 1890s cycling boom in England. Yet, ordinary middle and-upper-class fashions were vastly inappropriate for cycling; skirts and petticoats caught in wheels and tangled in pedals. And, looking too much like a cyclist in more ‘rational dress’ could elicit verbal and sometimes physical assault by parts of society threatened by progressive ‘New Women’. In this talk Dr Kat Jungnickel reveals how some pioneering Victorian women not only imagined, made and wore radical new forms of cycle wear, but also patented their inventive designs. The most remarkable of these were convertible costumes that enabled wearers to secretly switch ordinary dress into cycle wear. Join Kat as she demonstrates some of these costumes and shares fascinating stories of 1890s inventors whose cycling contributions continue to shape urban life for contemporary mobile women.

Dr Kat Jungnickel is a Senior Lecturer at Goldsmiths, University of London. She teaches and researches on mobilities, inventions, gender and DIY technology cultures. She is currently working on a European Research Council funded project Politics of Patents: Re-imagining Citizenship via Clothing Inventions 1820-2020, exploring 200 years of fascinating wearable technology histories, with a particular focus on political acts of resistance through clothing.

Image of women cyclists used with permission of Charlotte Barnes

Janet Sutherland : Our Homes for Our Future 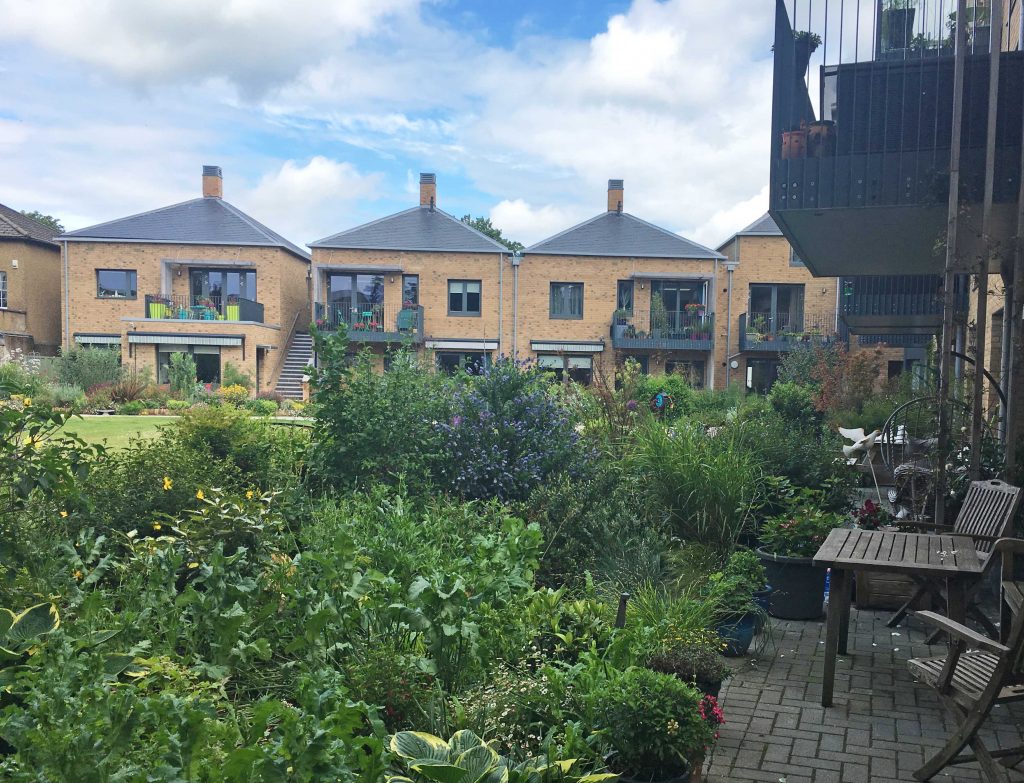 Will our homes support our independence as we grow older? Or do we want to move?

Let’s each do a Homes for Life review. Will my home be easy to live in and maintain, close to amenities and transport? What changes do I need to make, and when should I make them?

If we would like to move, what would we like to move to, and when is the best time to make the move?  I will provide some examples of moves made by local CEDU3A members, and also some images of inspirational ideas, in the UK and beyond.

Our ideas could help to shape our future choices, together we can influence! The right home can add years of independent living. 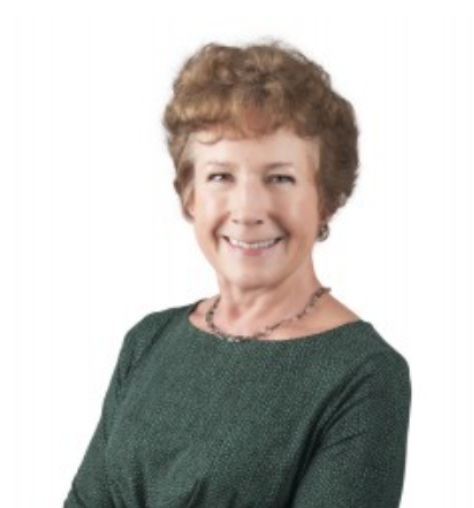 Janet Sutherland is a freelance consultant specialising in housing, urbanism and regeneration, with an interest in housing for older people, and is part of a national U3A group Future Lives. Janet has held senior Housing positions with the London Boroughs of Lewisham and Camden, and was Director, JTP Cities and a Board Member and Chair of the Services Delivery Committee of Aldwyck Housing Group. She is a Director of The Academy of Urbanism, a member of Catalyst’s Customer Experience Committee, of London Housing LIN steering group, and of Crouch End Neighbourhood Forum, and Chartered Institute of Housing.

Lucy Ellis : Friezes and Florals: the Business of Wallpaper Design and Decorating 1920-1939

After the First World War the British government embarked on a huge housing programme which saw over a million people move out from city centres to the bright new suburbs. Seizing the opportunity to revive their business, the wallpaper industry targeted new owner occupiers with everything from washable tile effects to traditional chintzy florals. Modern geometrics echoed the Jazz Age while friezes, borders and exotic floral designs clambered up the walls of the modest semi. Whilst the industry expounded the positive effects of wallpaper on health, mental wellbeing and children’s education, the design critics recoiled and went off to paint their walls white.This illustrated talk will discuss wallpaper design and the role of the independent decorator in the 1920s and ‘30s, outlining how the industry embraced mass production, advertising and branding, and sought to woo the all-important housewife with a variety of selling methods. 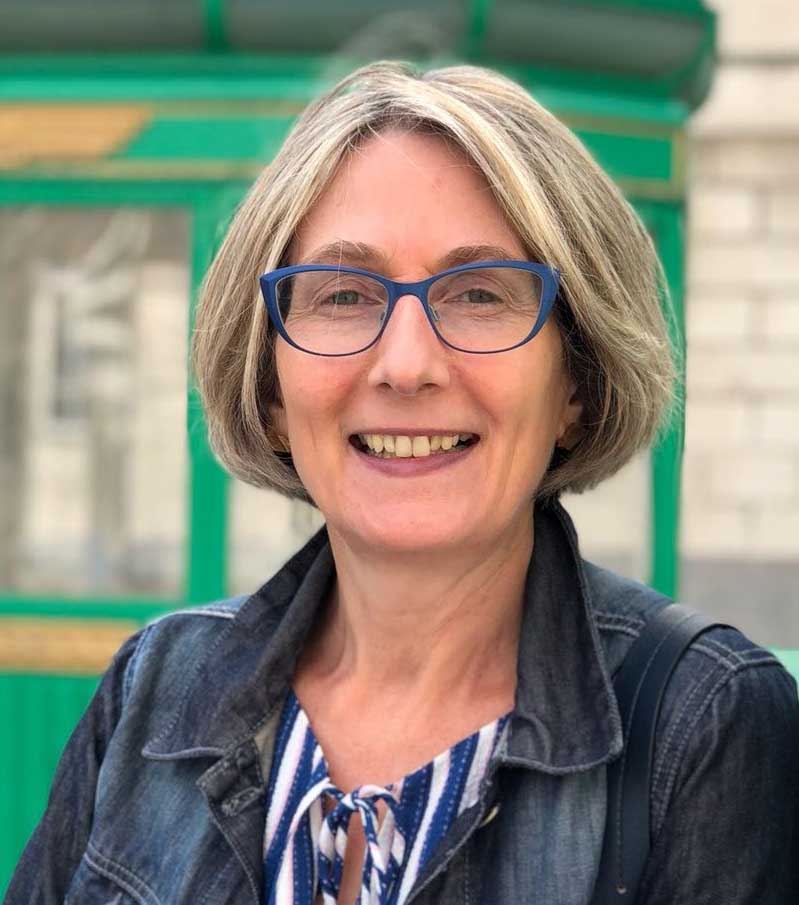 Lucy recently completed her MA History of Design & Material Culture with a dissertation on the wallpaper industry in the 1920s and 1930s. This return to academia followed a varied career encompassing fashion buying and product development for high street chains, museums and charities; cataloguing paintings for Art UK; translating and teaching French; and proofreading. Her first degree was from the University of Cambridge where she read Modern Languages. She is currently a volunteer and tour guide at the Fashion and Textile Museum.

There will be no Monthly Meeting in August 2020 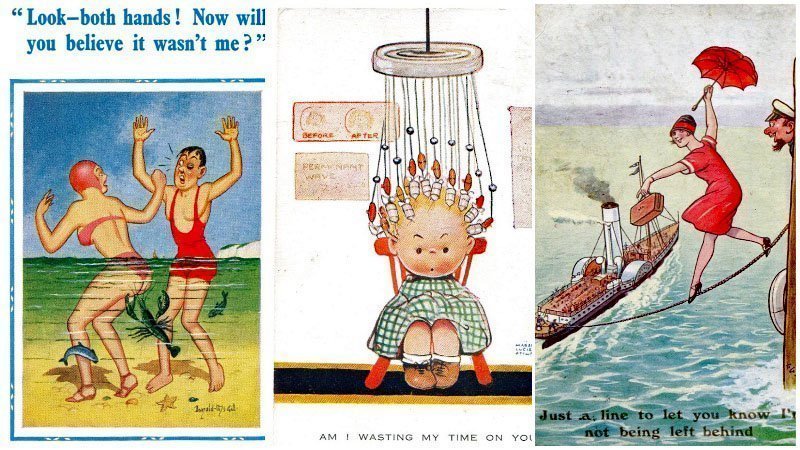 Artist-drawn postcards were the most popular art form from the Edwardian era to the outbreak of World War II. They entertained, inspired, instructed, motivated, persuaded and lifted up the spirits. James described the popular themes and styles by the masters of the medium such as Mabel Lucie Attwell, Donald McGill and Fred Spurgin; and the reasons why their popularity waned with the British public. 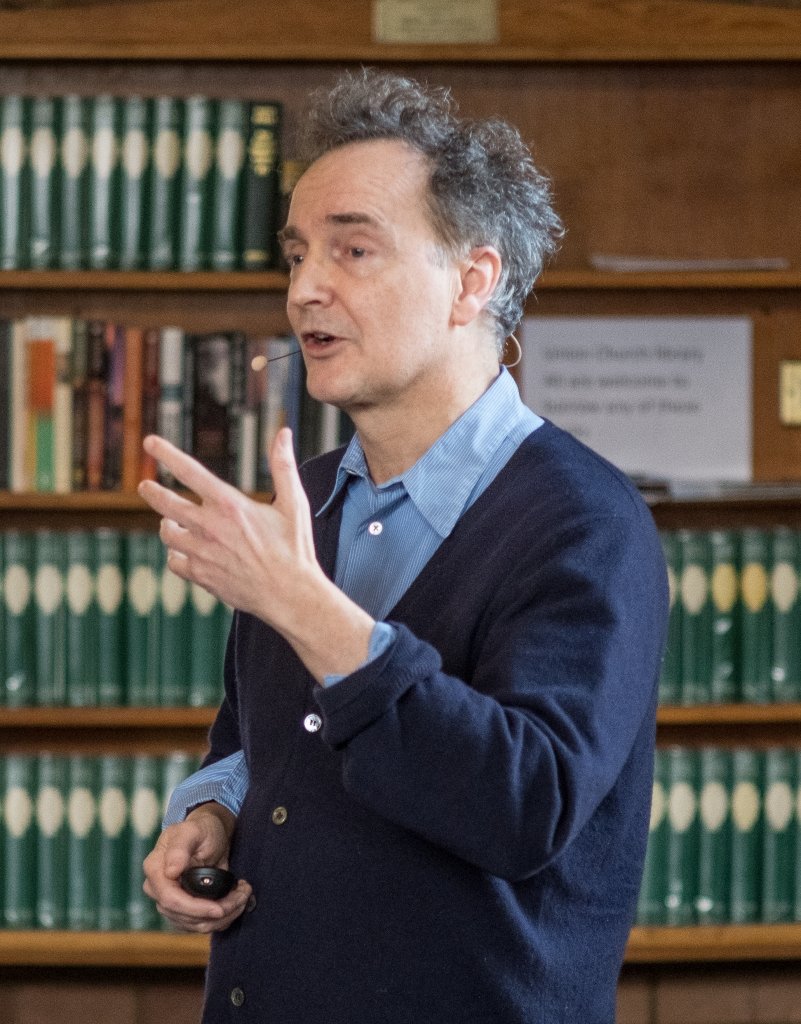 rewarded with a fascinating and enlightening talk on the work and achievements of Art UK, by its director Andrew Ellis. The ambition of Art UK (gradually being realised) is provide an online catalogue of the nation’s artworks. This is especially important as 80% of these works are generally hidden from public view at any one time. The venues in which these are housed range from the country’s most well-known museums and art galleries to smaller institutions like Haringey’s Bruce Castle (although, sadly, not the Royal Collection). Andrew described the photographing and cataloguing of the works of art, talked about copyright and licensing issues, and highlighted one or two recent initiatives of the Art UK website, the most interesting of which is the forum where members of the public are invited to share any information about painting and sculptures about which nothing is known.

Jenny Bryant (U3A volunteers co-ordinator, textiles, beer appreciation, etc) is also a committee member of the Friends of Priory Park, who are looking for a new treasurer.

We are holding another U3A quiz night on Tuesday 10 March 2020 , at the Maynard Arms.

◼ We have a new guest quizmaster, who hosts one of the area’s well-known pub quizzes, and there will be a variety of topics covering some of our U3A interest groups’ subjects.

◼ There will be 10 tables of 6, with a maximum of 60 for the evening. Don’t worry if you are not in a group – we will help you find a team. There will be a special joker round for teams who have only met on the night. It’s a chance to meet some other U3A members and have some fun.

◼ Tickets are £8.00 each for members and one or more guests. Advance booking is helpful so that we can estimate numbers for food. Please let us know your preference (meat/fish/veg) via penmoel@hotmail.co.uk.

◼ If you prefer not book in this way, please use the email penmoel@hotmail.co.uk to let us know you are coming, and you can pay on the night. If you have any questions use the email!

The February meeting of the Ancient History Group was entitled The Denisovan Cave.. David Lane showed us on slides how complex the work of scientists is who delve into the detail of DNA and nucleotides. There are 3 billion pairs of them and 99.9% are the same with other hominins. Only 0.1% is different. However, that still means three million possible differences! So plenty of chances for explorations. David mainly used the work of the Swedish Dr Svante Paabo who did much of this work. He compared DNA from Neanderthals with DNA from French, Chinese, Yoruba and Papua N Guinea people and found that 1 to 2% Neanderthal DNA is present.

He then studied the DNA from Denisovans whose bones were found in a cave in Russia. This involves so far the finger of a child and a 13 year old girl. The DNA found was considered sufficiently different to give it the name Denisovan hominin. It was found that 50,000 years ago modern humans mingled with Denisovans. Additionally, a Tibetan monk found a mandible. Protein analysis suggests a similar DNA to Denisovans. These explorations continue to fascinate and appear with new discoveries often in the scientific press. With the help of population genetics it is possible to reconstruct past traits and see how they remain or change over time. Adaptive introgression is one of the terms now used to speak about old material turning up in modern DNA.

Find out more about the Ancient History Group ▷

We now have 200 members in our Facebook group. It’s still only 25%, but some U3As can’t get their Facebook groups going because ‘older’ people tend not to use Facebook. We buck the trend, we embrace modern technology, we are young at heart! Onwards and upwards … 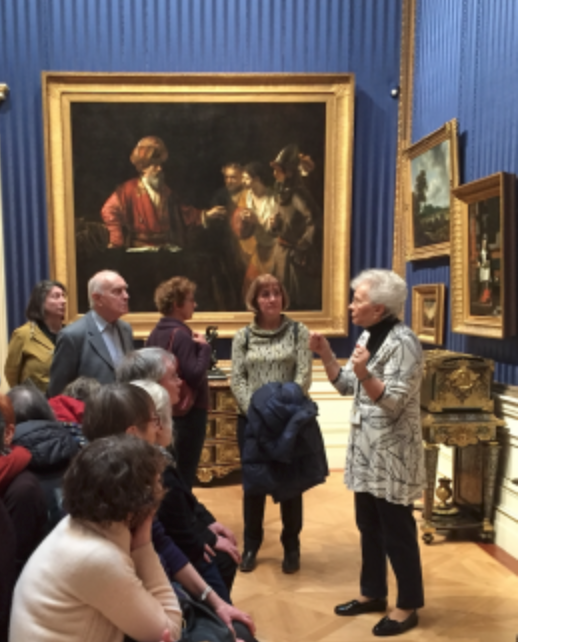 Find out more about the Group ▷

Several steps to the front door, no handrail

Three steps to the front door, no handrail

The Government and NHS have issued advice for members of the public following the confirmed cases of coronavirus in the UK.

◼ Typical symptoms of coronavirus include fever and a cough that may progress to a severe pneumonia causing shortness of breath and breathing difficulties.

◼ The UK Chief Medical Officers are advising anyone who has travelled to the UK from mainland China, Thailand, Japan, Republic of Korea, Hong Kong, Taiwan, Singapore, Malaysia or Macau in the last 14 days and is experiencing cough or fever or shortness of breath, to stay indoors and call NHS 111, even if symptoms are mild.

◼ More information about the virus, as well as symptoms and advice, is available to view
here

The theme of February’s Americana Group meeting theme was a favourite song by a male singer, and these are the chosen songs on a Dylan-free afternoon!

Find out more about the Group ▷