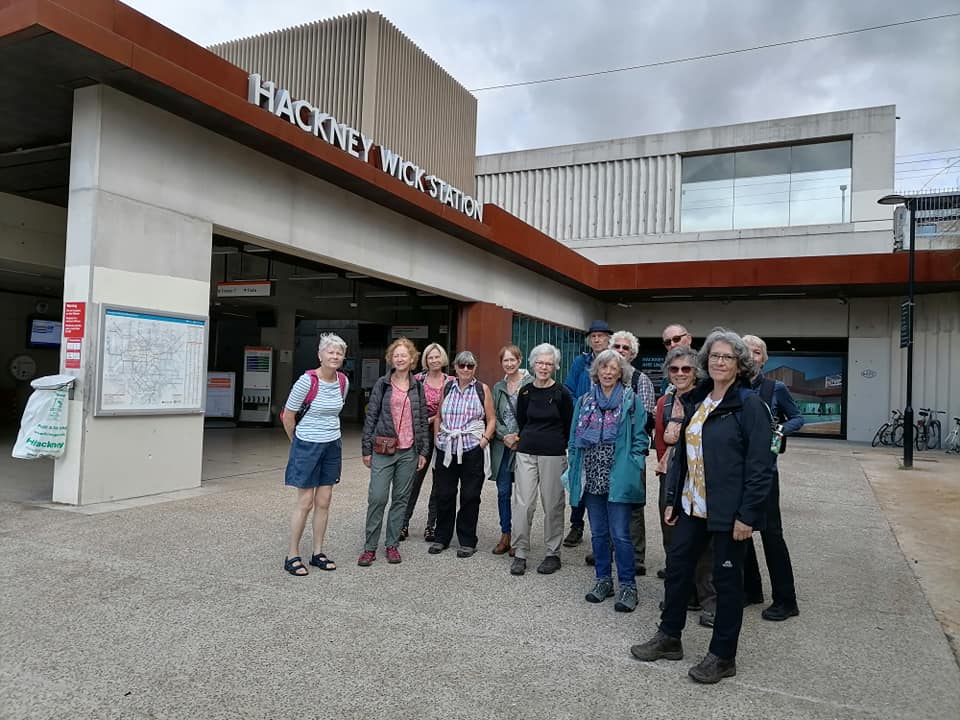 The first of the Leamouth walks took place in relatively good weather considering the summer’s incessant gloom and rain. For the Middle Way Walkers this was a walk with a difference, an exploration of East London’s industrial heritage rather than a walk in the countryside. The aim of the walk was to follow the River Lea to its confluence with the Thames.

We began our walk at Hackney Station, and quickly moved away from this rapidly changing area to the Lee Navigation (here known as the Hackney Cut), passing on the way Old Ford Lock before moving on to the Greenway. It quickly became apparent that this area, before the building of the Olympic Park known as Stratford Marshes, supported a complex network of waterways known as the Bow Back Rivers. The Greenway, a pedestrian and cycle path than runs from Hackney Wick to Beckton is built on the Northern Outfall Sewer, most of it designed by Joseph Bazalgette after an outbreak of cholera in 1853 and the “Great Stink” of 1858. We passed and admired Abbey Mills Pumping Station and the terrace of houses built to

house its workers, before leaving the Greenway and taking a secluded path by the edge of the Channelsea River to Three Mills Island, the buildings of 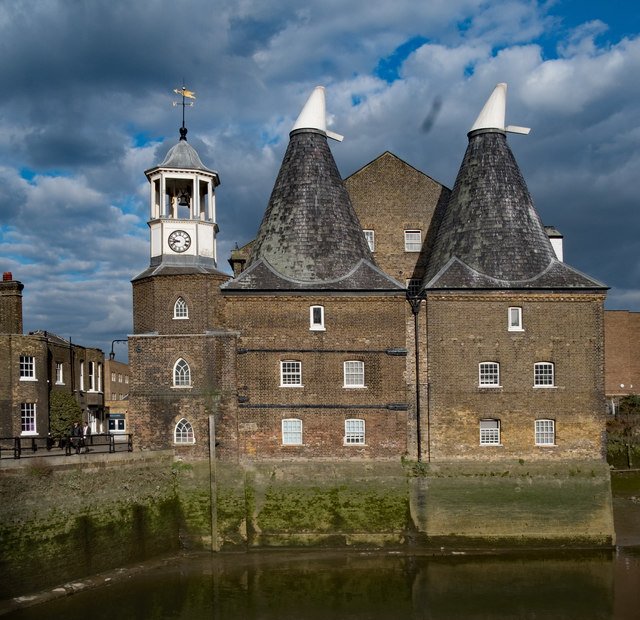 which which never fail to impress. The route led us to Bow Locks (after which the River Lea is

known as Bow Creek, where we crossed the river to visit another fine example of Victorian engineering, the finely detailed Bromley-by-Bow gasometers, and an adjacent delightful green space featuring memorials to workers of the Imperial Gas Light and Coke Company. Hunger dictated a lunch stop at the picnic tables (river view included) at Cody Dock, not before we stopped to examine in some detail a sculpture by British artist Abigail Fallis consisting of 22 shopping trolleys in the shape of a 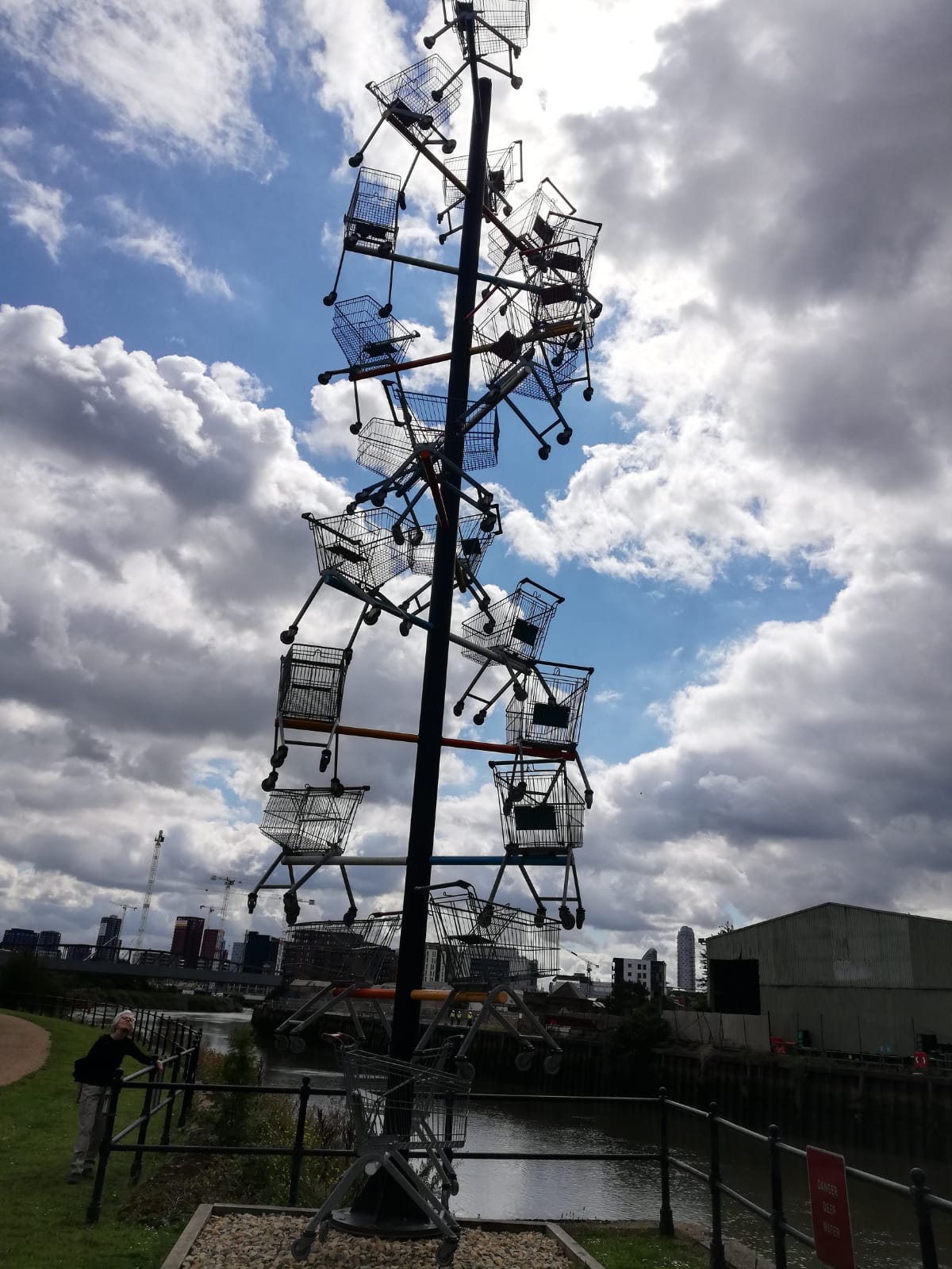 double helix. It was unfortunate at this point in the work that we had to leave the river, and take a detour along streets, with views of mountains of scrap metal, before we were able to the enjoy the relative tranquillity of the Bow Creek Ecology Park, notwithstanding the fact that Dockland Light Railway trains bisect it. We stayed by the river bank as far as we could through new London City Island development before we reached the confluence of the Lea and the Thames, Trinity Buoy Wharf. So much to see here, interesting sculptures, Container City and London’s only lighthouse.

The latter part of the walk took us ffrom the East India Dock Basin along the Thames (as far as we were able) to Island Gardens on the Isle of Dogs. On the way we walked through the oldest street in the area, Coldharbour, with a splendid former Dockmaster’s House and a public house where Lord Nelson entertained Lady Hamilton.

We passed one of the most prominent examples of British post-modernist architecture, architect John Outram’s Grade II* listed Isle of Dogs pumping 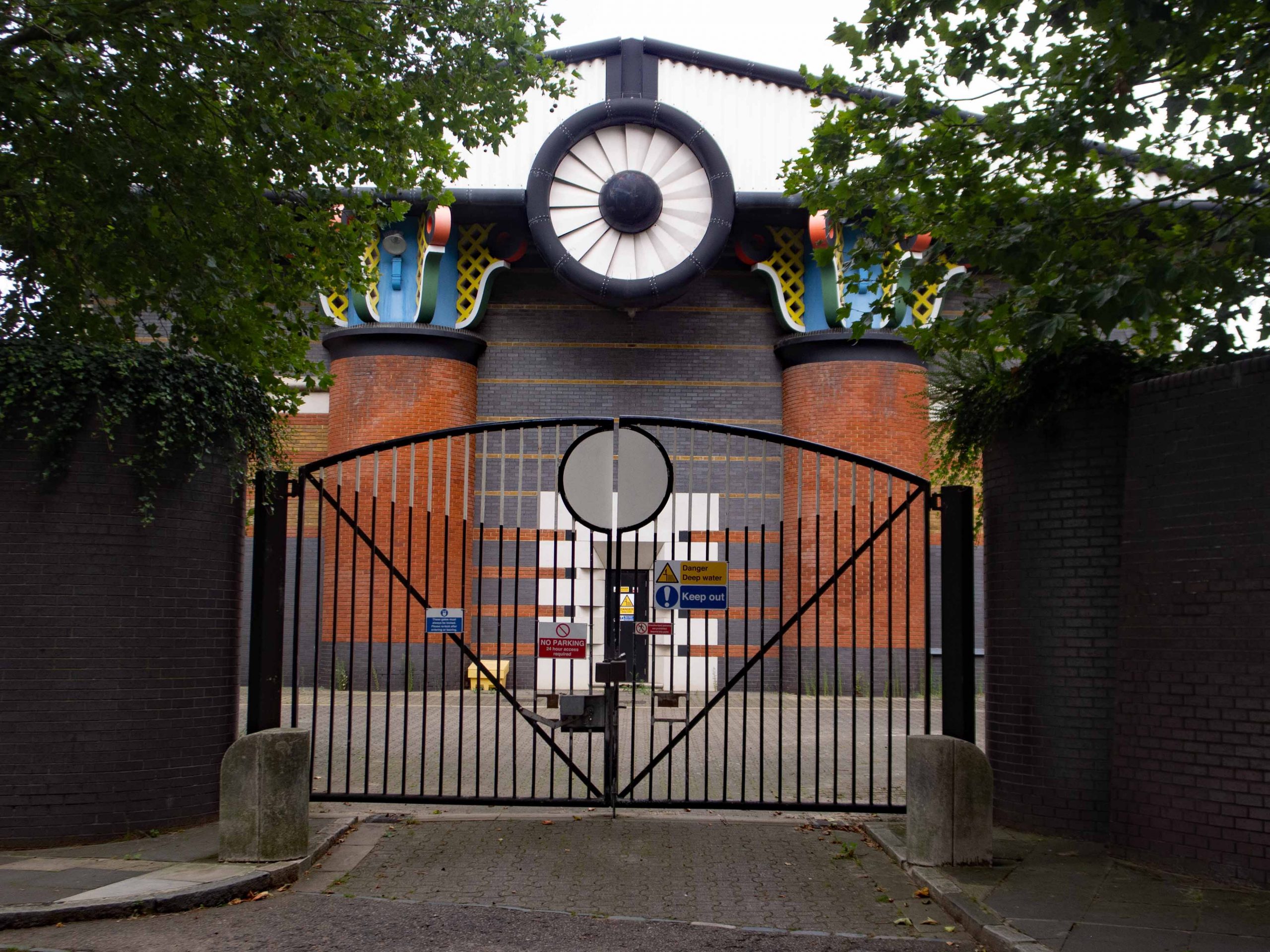 station, before eventually arrived at Island Gardens for a magnificent view over the World Heritage that is Greenwich.